Judge 2 Win is a revolutionary, first of its kind, livestock judging tool geared towards helping students, teachers, advisors, and coaches perform at their highest levels. With innovative features such as ‘Build Your Own Class’, J2W aims to provide flexibility in creating classes. Our videos are of the highest quality and carefully presented in a user-friendly format.

In addition, J2W’s mission is to serve as a motivational tool for our users by sharing tips, tricks and important life lessons learned by industry leaders along their way. For the J2W team, being involved in a judging program was more than just marking our cards and turning them in. It made an everlasting mark on our lives, as we hope it will with yours.

Here at J2W, we believe the skills and lessons learned while leaning on a fence with a steno in hand are second to none. That is one of the many reasons we are so passionate about this business. See below to learn more about the dedicated faces behind Judge 2 Win. We are so excited to start this journey with you.

Jacob, Lafayette, Indiana native, raised and exhibited swine through his childhood. He also participated in livestock judging programs through FFA and 4-H at the state and national levels. This led him to the Connors State College livestock judging team. After Connors, Jacob made his way to Lubbock, Texas. There, he earned a bachelor’s degree in animal science from Texas Tech University, and a master's of business administration.  During his time at Texas Tech, Jacob was a member of the 2014 Texas Tech Livestock Judging and Meat Animal Evaluation Teams. He met his wife, Kassandra, at Texas Tech. They welcomed their daughter Lilly in October 2018. Jacob is a former county extension agent and livestock judging coach.

Kassandra, originally from Sumner, Washington, grew up exhibiting livestock. However, she soon found her real passion when she joined her first meat judging team. Kassandra competed in FFA & 4-H at the state and national level, receiving multiple honors and awards.

Her success led her to Texas Tech University, where she graduated with a bachelor’s degree in meat science. In addition, she was a member of the 2012 Co-National Champion Wool Judging Team, 2013 National Champion Meat Judging Team, 2013 & 2014 National Champion Meat Science Quiz Bowl Teams, and the 2014 Meat Animal Evaluation Team. Kassandra was named to the 2013 Meat Judging All American Team, and served as the assistant meat judging coach for Western Texas College. She received her master’s degree in meat science from Kansas State University.

Hayden, born and raised in Midland, Texas, grew up exhibiting sheep and swine across the nation and was very successful. Hayden, also a member of his 4-H livestock judging team, cultivated a passion for livestock judging that would lead him to Blinn Junior College’s livestock judging team. Hayden then attended Tech University, and received his bachelor’s degree in animal science, and a master’s of business administration. Hayden was a member of the 2014 Texas Tech Livestock Judging and Meat Animal Evaluation teams, as well as the 2014 National Champion Meat Science Quiz Bowl Team. At Texas Tech, Hayden fell in love with his livestock judging teammate Brittany and they got married in April, 2017.

Brittany, originally from Howe, Texas, began exhibiting cattle and hogs at age nine. As the daughter of two agriculture science teachers, Brittany was involved in a wide array of activities. However, livestock judging was always a special focus for her. Brittany competed in both FFA and 4-H at the state and national level, and eventually ventured to Texas Tech University to continue developing her skills. Brittany graduated with a bachelor’s degree in animal science. She was a member of the 2012 Co-National Champion Wool Judging Team, 2013 National Champion Meat Judging Team, 2013 & 2014 National Champion Meat Science Quiz Bowl Team, 2014 Livestock Judging Team, and the 2014 Meat Animal Evaluation Team. She was also named to the 2014 Livestock Judging All American Team. 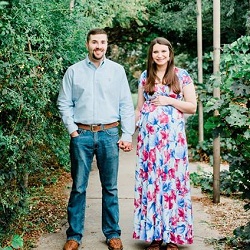 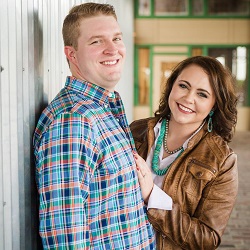